skip to main | skip to sidebar

"I'm All About Color" - Nellie 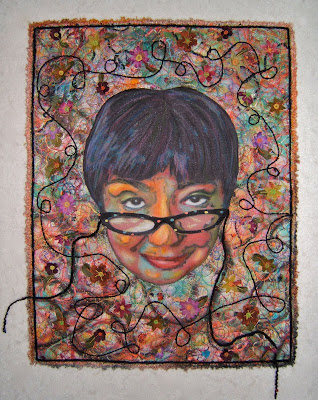 Periodically through the years, I've attempted to do a self-portrait. Each time I ended up scrapping it. Need I say this challenge made me nervous about finally succeeding? It began with a picture taken by the camera built into my computer. 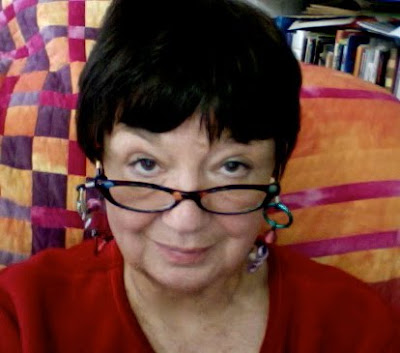 This point of view seemed appropriate since my husband claims I spend so much time on the computer. He often sees me peering up over my glasses and the screen to acknowledge his presence ... or interruption.

I started out to make a pattern and had planned to use fabrics to portray what I see in that photo. However, this had not worked for me in the past. Now that I am more computer literate, I decided to play with the picture in "Adobe Photoshop Elements".

The first photo in the above strip is the original picture. The next one shows it "posterized". Then I gave it "poster edges".

I played with all the filters in the "Elements" gallery. I liked the effect that happened to my hair in the photo on the left side in the frame below. For the life of me, I can't remember, nor figure out what I did to get that particular effect. 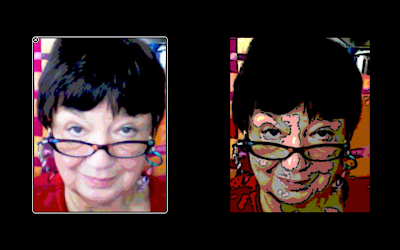 I printed both of them onto paper with my Canon printer. After cutting and playing a bit I was sure that I needed both of them printed on fabric. This was the first time I've used commercially prepared for the printer fabric. The picture of me on the left was transferred to one that was fusible (on the left below) while the picture on the right side was transferred to the fabric stiffened with paper (on the right below). 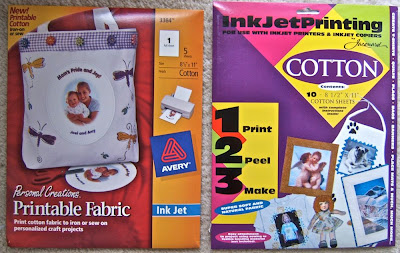 The unfused fabric portrait part of my face and hair was cut away from the background. Just portions of my highlighted hair were cut from the print with the fusible. Fusing those pieces of hair to the other printed hair took the highest heat setting on my iron and a longer time than I've ever used for the fusing process.

I traced the outline of my glasses from one of the paper photos onto the paper of a fusible web over a lightbox. That was then ironed onto a polka dotted fabric. The dots were colored with permanent markers.

Then the glasses were cut out and fused over the pair on my fabric printed portrait. I also softened some of the "posterized" edges and added more highlights to my hair with oil stick pastels. Then played with various backgrounds. 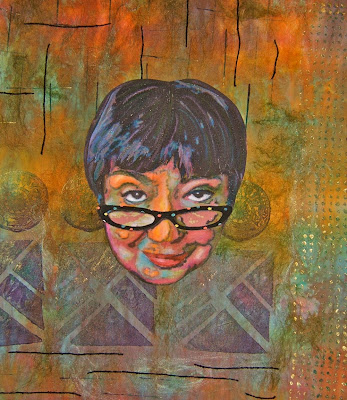 The fabric in the above photo is one of those extra special pieces in my stash. I love the marks and designs on it. However they were not made by me so I didn't use it. The one that I had airbrushed loops and squiggles on won out. My signature "ortwork" technique of scattering bits and pieces from previous projects had to be a part of this piece. 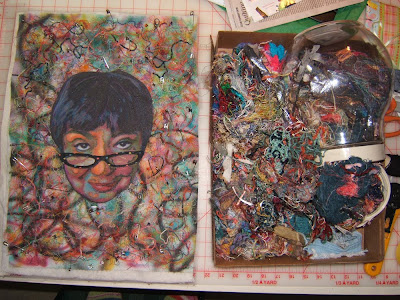 Before the collage process, I sculpted my face with layers of batting. There are more layers over my hair and down the center of my face, while there is none on my eyes. 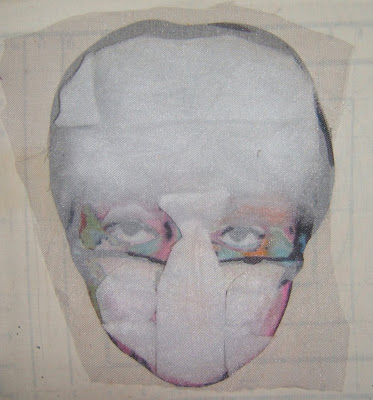 The piece of netting is there to hold the layers of batting so they would stay in place while when I positioned it on the background. The excess around the edges was trimmed away.

Another layer of tulle netting on top holds all the bits and pieces as well as my padded portrait together. Selecting a soft violet colored tulle softened the strong and harsh colors as well as the hard edges. This subdued element more accurately portrays my personality and outlook on life ... both are definite, but not harshly expressed. 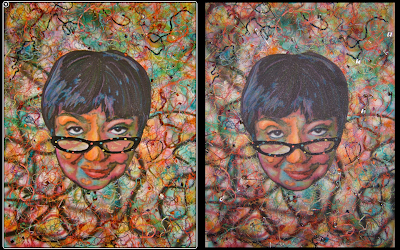 I free-motion quilted around my silhouette as well as around the eyes, down one side of the nose, the smile line between the lips and along the bottom edge of the glasses with a dark monofilament thread. A loop pattern in the background with a variegated thread was done too. Then flowers were added to the surface by free-motion quilting their centers. Finally, defined squiggles and loops were added by couching yarn to the surface. A heavier black yarn that had dots of color in it was couched in place to become the holders of my glasses. Also, a lot more blending and highlighting with the oil stick pastels as well as some ink work on my face was done.

Finally, here are the original photos next to my finished portrait.

I'm pleased the final piece doesn't mirror its origin. They all look like me, but there is so much more in the piece of art ... it projects how I feel on the inside rather than what I actually look like on the outside ... a view of me from the inside out.
Posted by Nellie's Needles at 6:00 AM

Thanks for stopping by and commenting!

Artist Pages with Photos, Tips and Techniques to Share